My last adventure in Vietnam was a medevac helicopter ride stained with the blood of previous missions. Pilots were talking to the hospital, gunners were shooting, medics were trying to stop the bleeding, and escort aircraft were protecting anything with a big Red Cross on it. A symphony of man and machines came together to the rhythm of rotors trying to reverse the irreversible. Huey helicopter death machines once designed for killing now saved lives in the ebb and flo of war.

Kelly fought an ongoing battle with both Washington and Saigon over the use of helicopters believing they should be of medical use only. Previously helicopters were of general use with removable Red Crosses that were put on only when needed for medical evacuation waisting both time and manpower. Kelly fought hard to keep his five Huey helicopters dedicated to his units primary mission.

Some days the ground medics never took a brake and the skies over the 24th Evac were backed up with incoming choppers filled with wounded soldiers. These tireless workers played the middle man in a life saving chain of events as over 300,000 wounded Americans came through their caring hands. 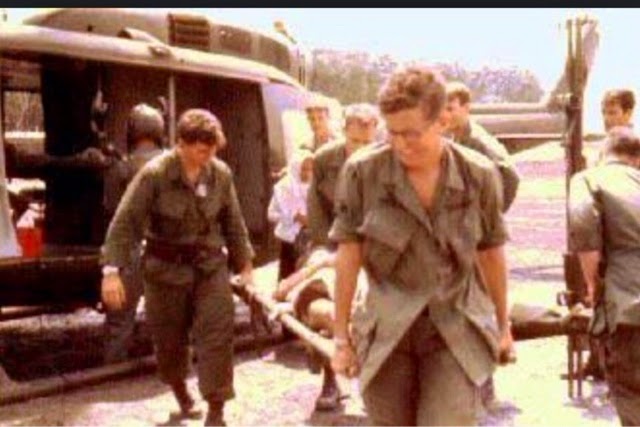 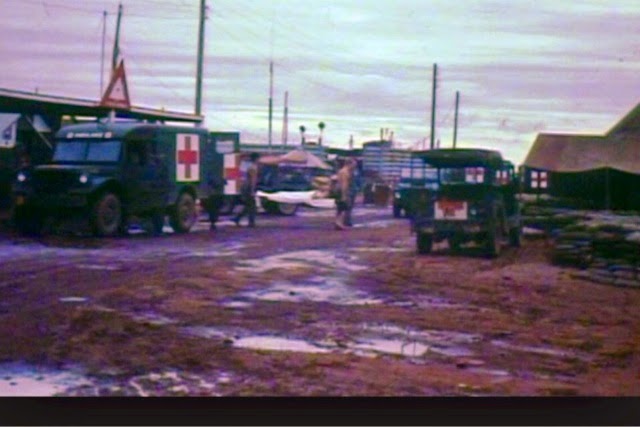 Kelly's ace pilot, considered by many to be the best pilot of the Vietnam War, was Officer Patrick H. Brady. On January 5, 1968 Brady flew an incredible series of nine medevac missions in fog over the mountains of Chu Lai and received the Medal of Honor for heroism. By the time he finished his second tour of duty his resume also included Distinguished Service Cross and Distinguished Flying Cross with Five Oak Leaf Clusters. Flying his famous helicopter "Dust Off 55" the term became synonymous with medevac rescue for the remainder of the war. Instead of calling in a medevac helicopter soldiers would call in a "Dust Off."

Life saving surgeries, amputees, and progressive new medical techniques were practiced in this room. The 24th Evac, considered by many to be the formost medical facility in the war, housed some of the most accomplished doctors in the world. 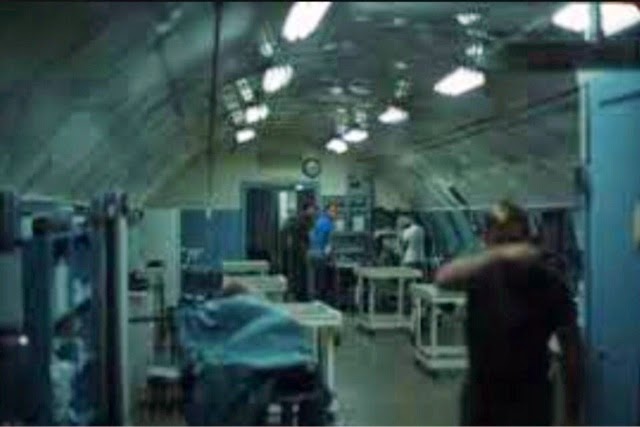 The 24th Evacuation Hospital (semimobile) found it's roots in Arkansas in July 1923 in the Reserves as Evacuation Hospital No. 24. By October 1, 1933 the 24th Evac was allotted to the Regular Army and later activated into service in June 1942 at Camp Rucker AL in preparation for the Eropean theater and WWII. Establishing itself as the premier Semimobile Unit of its time it moved into Occupied Germany for the rebuilding period and returned to the U.S. for deactivation at Fort Bennington GA. Activated and deployed again in 1966 for service to Long Binh Vietnam it remained as the center for medical treatment in Vietnam until the beginning of the U.S. pullout in 1972.

Soft things, friendly aromas, and a white enviroment suggested I was dead and in a nice place. Soft voices, gentle hands, and the most beautiful face I had ever seen appeared in my peripheral vision as I opened my eyes. She spoke to me but I couldn't hear and focused on my senses that were working. I had to fight to remain conscious but then I drifted off. A month had pasted since my last conscious though and without my knowledge I was transported across the South China Sea to Camp Zama Japan. As far as I could determine I was alive.

UNCLASSIFIED TRANSPOTATION ORDERS, SUBJECT MEDICAL EVACUEES
This piece of paper was the only means of identification I had and was pinned to my bandages. The document states four evacuees are to be transported to two different hospitals in Japan. Three of the for wounded are from my unit.
Highlights top to bottom:
1. USARV LBN RVN, U.S.ARMY LONG BINH RUBLIC of VIETNAM
2.SUBJ: REASSIGMENT OF MEDICAL EVACUEES
3.USAH CP ZAMA, U.S. ARMY HOSPITAL CAMP ZAMA
4. ROMEO FRANK J 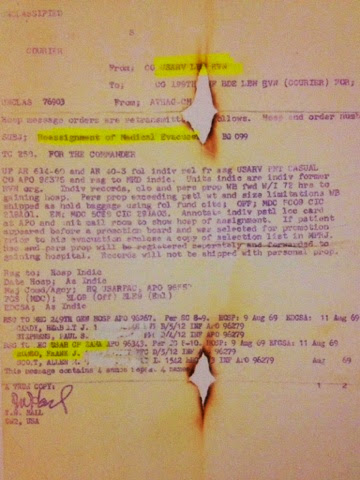 On display in THE ART OF WAR exhibition.

Camp Zama's first hospital was built by the Japanese in 1940 with a capacity of 300 beds. It was enlarged to 1,000 beds during Japan's war effort and was called Sobudai-mai, Japanese Military Hospital.

The 128th Station Hospital was activated in December 1942 at Camp Beale CA and headed for New Guinea and eventually the Phillippines. August 16, 1945 the hospital was attached to the 8th U.S. Army  unit and was part of a large invasion unit in Tokyo Bay that was never needed. On September 2, 1945 while the surrender was being signed the 128th battled a Typhoon and most of the hospital equipment was lost at sea. As General MacArthur first stepped foot on Japanese soil the 128th was the first unit to aid with American POW's. To give medical attention to the POW's the first medical facility was set up at Camp Zama.

During the Korean War the 128th combined with the 141st General Hospital for the expected influx of casualties. By 1951 a total of 4,370 patients were admitted in one year to this 300 patient bed facility. Following the Korean War Camp Zama continued to serve U.S. military forces and aid the local Japanese civilians.

Camp Zama medically treated and housed the critically wounded that were to delicate to make the long arduous trip back to the United States. I fell into the category of critically wounded and spent months undergoing numerous operations to put me back together. I was shot in seven places with shrapnel and blast residue imbedded throughout my body. Unable to walk, talk, or use the lower half of my body I remained wrapped like a mummy hanging from a circus like apparatus trying to work through my lastest adventure. 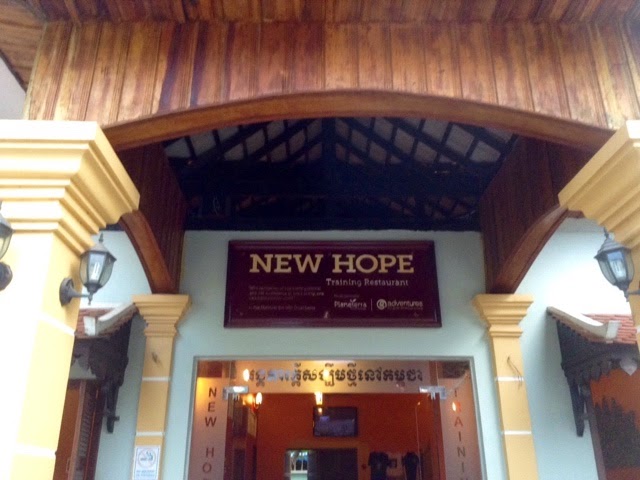 Phnom Penh boasts 4.5 million people and during Pol Pot's reign of terror the city was empty along with most others. The most populated area were the army centers and Security Offices like S-21 where his murderous killers were busy slaughtering innocent people and one third of the population was either murdered or displaced.

China was anxious to make a deal with Cambodia early in the sixties allowing infiltration of its border regions. The Viet Minh Regime of Ho Chi Minh backed Vietcong were next to stifle and inhabit the area giving the U.S. an excuse to proceed with bombing missions from the border to the outskirts of Phnom Penh. Finally genocide swept across every aspect of Cambodian life capping off almost two decades of death and destruction.

To say it touched every life in Cambodia is an understatement. In the week I've been here every person I've met has a story of family members who have fallen victim to the genocide. Two generations later the aftermath of terror is still vivid in their minds and overflows with emotion while they still try to cope and understand. Why is certainly a question but more so is why do it to your own people. This was not an invasion of WWII politics or ethnic cleansing but a suicidal event of a society from within. I myself am trying to understand and visually see the slow methodical comeback of a once proud society in ruins.

So, a teacher in New Hope Cambodia, teaches students English. 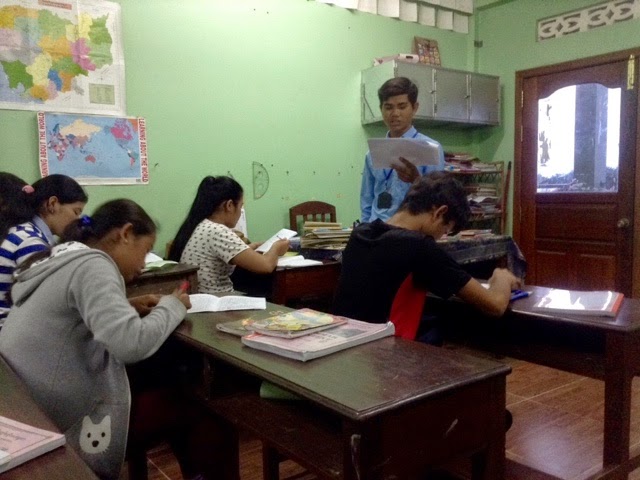 New Hope Cambodia School is located in Mondul 3, one of the poorest slums in Siem Reap Province in central Cambodia. The village is made up of 500 families of old army personnel, sex workers, and displaced men, women, and children. There is no formal education in Mondul 3 or any kind of vocational training and living conditions are appalling. Food is scarce. This village of dysfunctional families losses countless men, women, and children to disease and famine. Often the children rely on the elderly to survive or fend for themselves. In order to survive many girls fall victim to sex trade and trafficking or die of sexually transmitted disease.

Kevin a CEO working for G Adventures, a Toronto Canada based company and proud sponsor of New Hope, brought me to New Hope under the guise of being taken out for dinner. Before dinner was to begin a group of us were given a tour of the facility and I was privileged to sit in on a classroom in session. After the lesson was over I got to interact with the students and before I knew it I was answering questions, just like in America, about my prior experiences during the war. Interestingly enough the questions were identical to what American students ask me a half world away. It was then I thought, after my Skyping session with the American students, wouldn't it be fantastic if the two classes could Skype each other and I could mediate with the teacher. I've since contacted an American school and been given the Ok. I will work on it when I return home.i

Selfie in an English class in New Hope Cambodia. No talking! 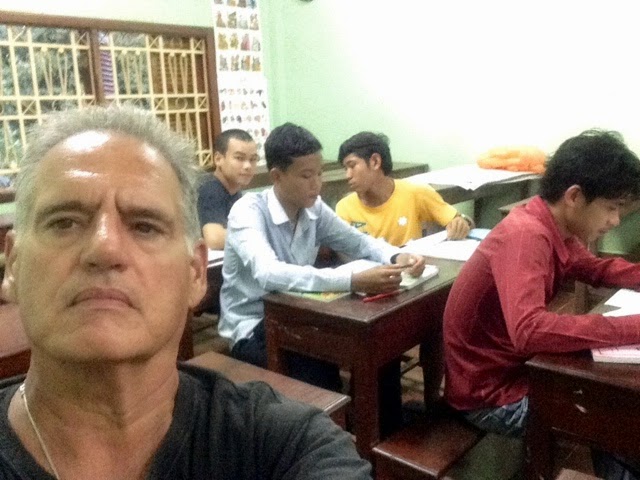 I showed the students where in America I live, looks like any classroom in America. 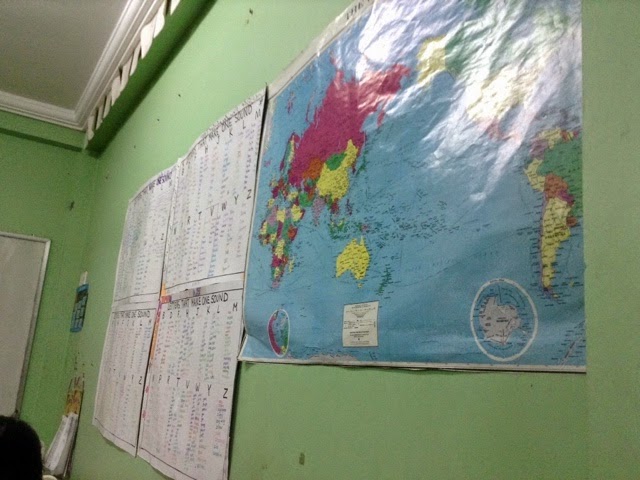 Meet "So", of course I can't pronounce his name. So, I call him So.
So has been with New Hope for 6 years. 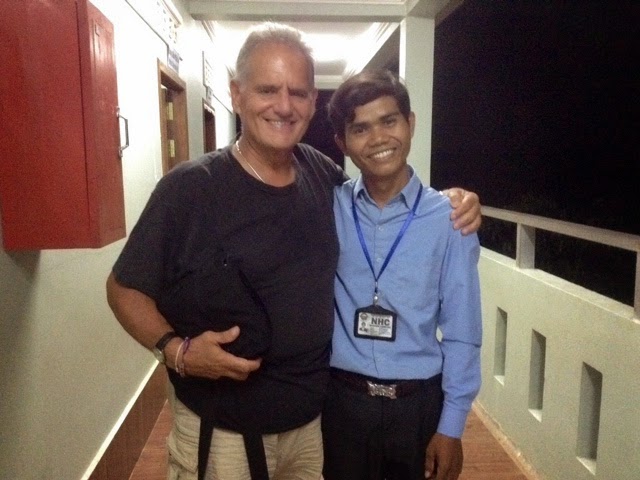 From humble beginnings as a grass roots organization, New Hope has become an internationally respected non-government organization run by a local Khmer called Sot Suo Kemsour. Sot Suo realized education was pointless without good health and so New Hope adresses the daily issues of its local population by providing food and a health clinic. 100 emergency patients come through the clinic facility daily and are treated free of charge. Food and support for over 340 families and 100 malnourished babies come through the clinic monthly. 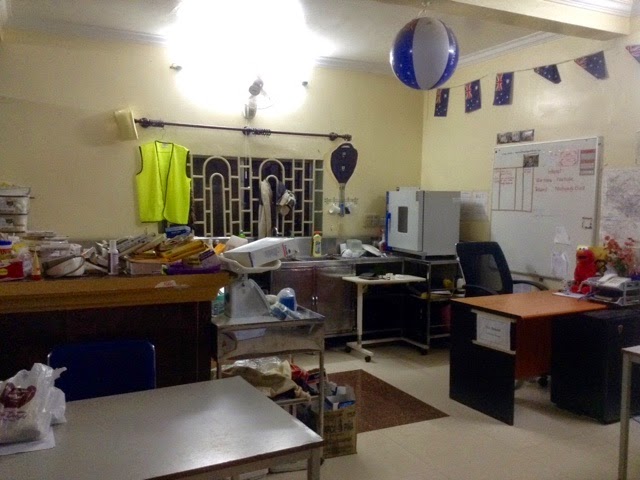 Every morning this waiting room is filled with desperate people in need. 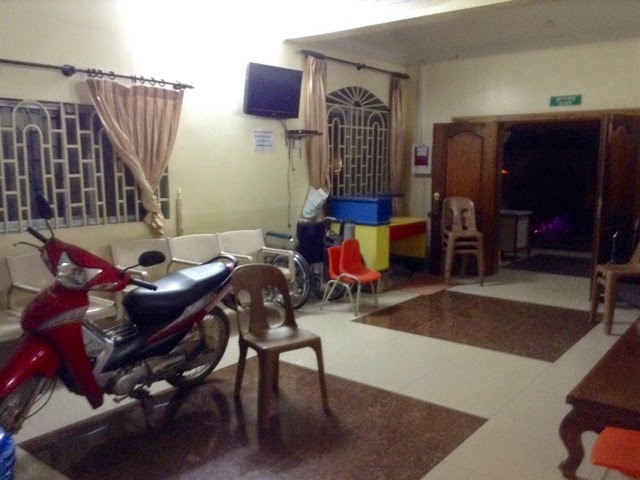 Finally my long awaited dinner that I was promised, but this would not just be any ordinary dinner not at New Hope. Recently New Hope opened a restaurant completely staffed by students learning the hospitality trade. Cooks, waiters, and hosts politely introduce themselves by name and serve both vegetarian and meat dinners accompanied by beverages of your choice. The dinner was absolutely delicious with the exception of the appetizers of sautéd beatles and bugs. There are benefits to being a vegetarian. 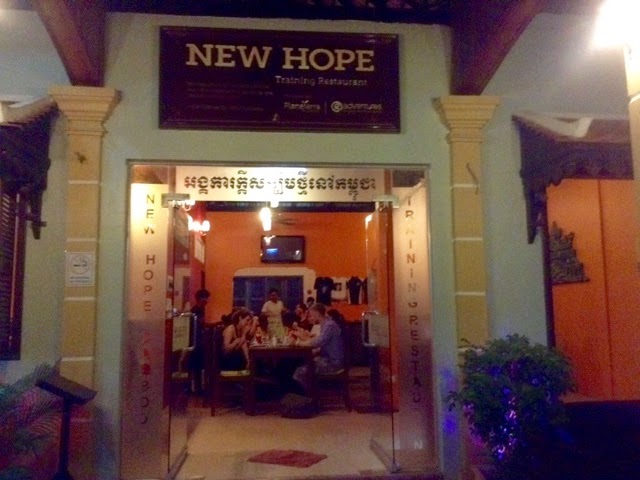 After two generations the aftermath of war and genocide is apparent in Cambodia more so than the other Endochina countries and the legacy lives on. Being a part of this world since I was a young man makes me vulnerable to compassion and guilt. It is without reservation that I say we played a role in creating this enviroment and it is without reservation that I say we owe a debt. If only the fact that we, along with the rest of the world, turned a blind eye to the genocide then that alone should be reason enough. Money, greed, power, and the Cold War were our justified reasons to be here then why not genocide. So, why not be here now? 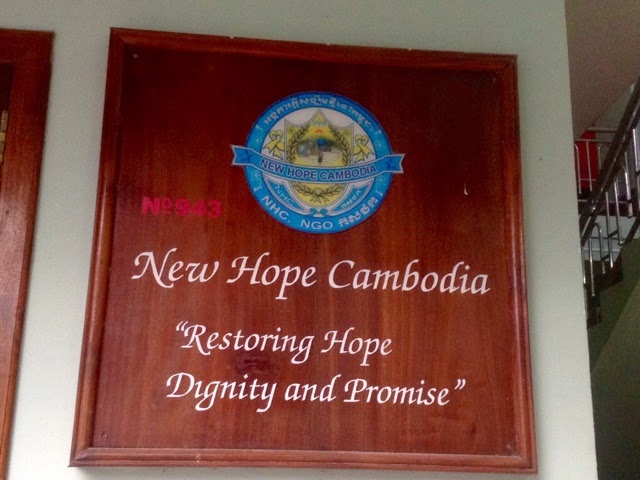